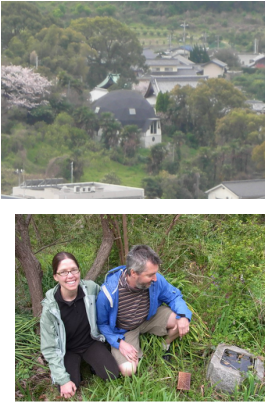 April 2012. We travel to Japan to bring some of Chu’s ashes back to put into the earth where she originally came from, a small rural village called Mitsugi in Hiroshima prefecture, not far from the Seto Inland Sea.


We first arrive in Setoda Island. Our friend there used to live in California Harumi, and Chu used to play with her dog, Fukin. Fukin came back to Japan with our friend to live. She’s now buried in Setoda in our friend’s backyard. For one day, we set the box with some of Chu’s ashes next to Fukin’s grave so they can have some kind of reunion and ‘hang out’ as our friend put it. 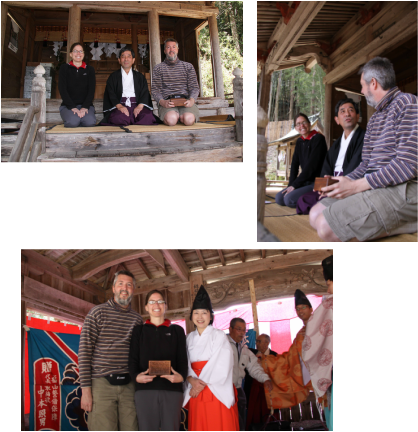 We attend a rare Shinto religious ceremony in Mitsugi village and share Chu’s story with the attending priest and explain why we returned after 19 years. He understands the importance of honoring animals and the immense value they add to human life 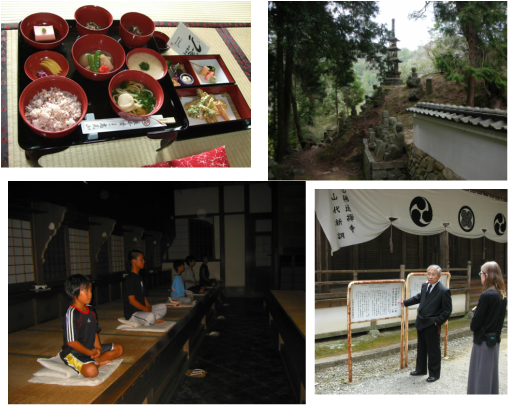 The day arrives to bury Chu in my friend Rocky’s backyard in Mitsugi village. We start out the day by going with Rocky to a regional temple called Buttsugi and participating in a commemoration of the death of the leader of this temple. It is a beautiful place and an interesting ceremony, and Tim reflected that he did a meditation retreat for 3 days at this temple many years ago.

We eat a delicious Buddhist vegan meal (Shojin Ryori) with the monks afterward. Shojin meaning pursuit of enlightenment and Ryori meaning cooking. Of course, Japan being the land of contrasts, we consumed with sake and beer with the monks.

﻿
With great sadness, Rocky passed away August 11th,  2014. He will always be remembered for his generous spirit, clever outlook on life, and for being such a great man to his family.

We are most honored to have a Buddhist priest from the Rinzai sect who helped perform the Butsugi ceremony travel with us back to Rocky’s house to now perform a ceremony to honor and remember Chu. This Buddhist ceremony to remember and honor an animal or pet is known as Petto Kuyo.  Close friend Toshi along with Rockys wife attend and share in the blessing. 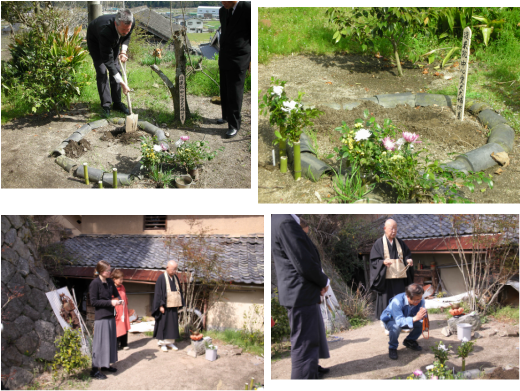 The priest draws Kanji characters on the wooden burial tablets which are called a Kaimyou or Sotoba, essentially a posthumous Buddhist name:  渡米院忠愛犬大姉。These characters roughly mean:

中: character that stands for Chu

供養, the last two characters on the stake, means that we gave Chu a “memorial service” 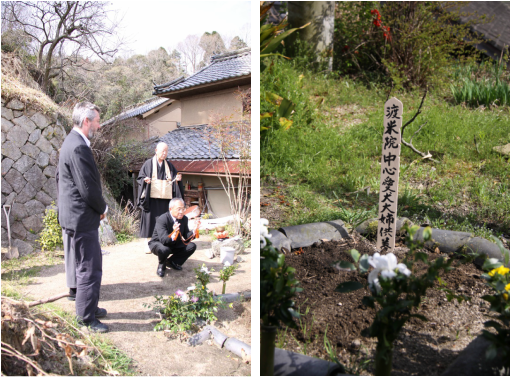 広大智慧観. This is written on the back of the wooden tablet, and it is one part of a sutra from the Buddhist scriptures. 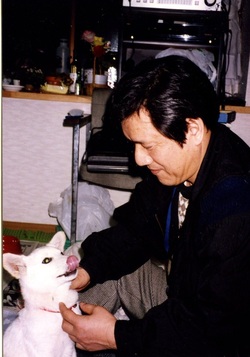 We stay one more night in Mitsugi, and the next day we go to the middle school (Chugako) where Tim previously taught and where he had found and picked up Chu that started this whole journey 17 years ago. The town and Tims colleagues (thank you Ueda-sensei) arranged  so that Tim can teach brief English lessons to two classes. Tim’s old team teacher Ueda-sensei arranges all of this. He and another friend Toshi-san then drive us to the train station. The level of kindness from literally every single person on this journey, left us breathless. Here is a pix with Toshi from 1996 not long after adopting Chu

We soon take off on a bullet train heading to Osaka. There we meet our Setoda friend, and we all travel up through the mountains to Koya-san. Kōya-san (高野山) is the place of greatest importance and connection for Chu’s breed. The Kishu ken breed’s significance to Shingon Buddhism led it to be proclaimed a national living treasure. The founder, Kobo Daishi who is responsible for this happening, is entombed here and we wish to connect that part of history to Chu. Chu’s Kaimyou or Sotoba joins us as Rocky thought it better to bring this back to the United States. 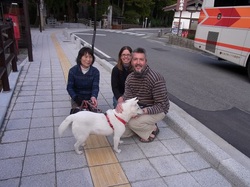 click to enlarge
After arriving in Koya-san and and settling into our room at the Shojoshin-in temple, we step outside onto the street almost on a whim (we only have 5 minutes before dinner is served). How gratified and amazed we are to see on the sidewalk in front of us a white dog strikingly similar to Chu. It is the same breed, friendly, and was rescued by its owner. She even has a sign of an injury on her snout just like Chu. Her name is Yuki, or Snow. We feel like she was waiting here for us to welcome us or to be a message or comfort from Chu. 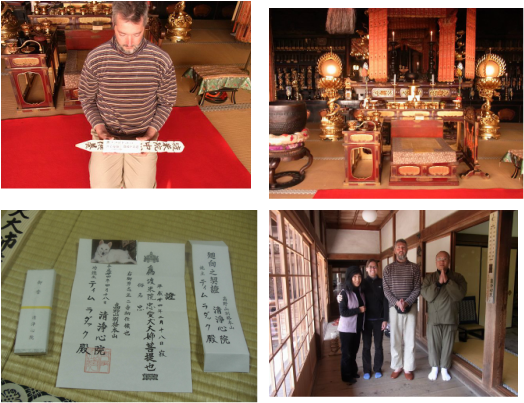 The priest at Shojoshin-in, at the time we checked in, had agreed to do a Petto Kuyo ceremony for Chu. He collected her wooden burial stake and a photograph of her as a puppy to use in the next morning’s ritual. At the ceremony, the priest does a special chant for Chu and then Melinda and I are led to the back of the worship area to add incense to the burner and say a prayer for this sweet dog. 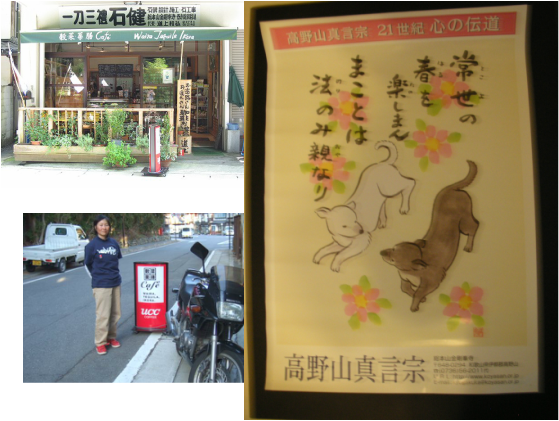 The next day not far from where we saw Yuki, we locate a macro biotic vegetarian café run by a friendly woman, named Waira Tequila Ikora 穀・菜・薬・膳カフェ ワイラ・テキーラ・イコラ
（こくさいやくぜんかふぇ わいら・てきーら・いこら. Harumi explains Chu’s story to her and we talk about a special poster that is hanging in the café that honors the story of how Koyasan was first found and how the white Kishu dog assisted in that journey. The café owner, who loves animals, offers the poster to us in a incredibly friendly gesture. This special gift is framed and will be a forever memory of this act of kindness and connection brought upon by animals.

We then travel to Kyoto, where we find a photo of the mobile phone mascot, who is famous in Japan, and who is from the rare Kishu-ken breed. We meet Shinya, long time friend who used to live near us in California, and who took some of the best photos of Chu and us we have ever viewed. 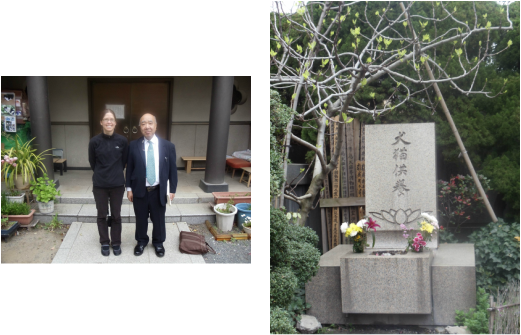 We visit Tokyo and head to meet longtime friend Professor Yoshi吉津宜英 (who first taught Tim Zen meditation at his family temple in Jogu in Fuchu 18 years ago). He is a professor of Buddhist thought at Kamazawa University.  We meet Yoshi at the Eko-in Temple in Ryugaku section of Toyko. This special temple is known for being one of a few temples in all of Japan that specifically honors and celebrates animals in addition to other beings. It has long been associated with a place of significance for the souls of animals and dates back to when a Shogun wished to honor a special cat. Many shrines to animals have been built.  Yoshi is also a priest and suddenly recites a  powerful sutra to honor Chu. Impossible to hold back tears.

With great sadness, Dr. Yoshi passed away January 2014. He will always be remembered for his kindness. 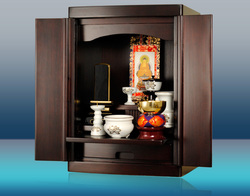 Our last day is spent packing a small Japanese Buddhist Altar called a ‘Butsudan’ which is used in homes to commemorate deceased family members. 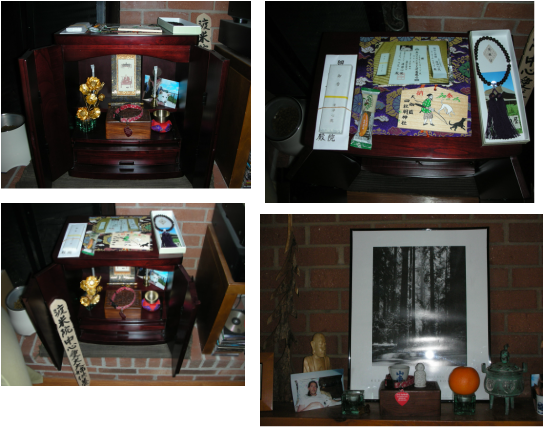 Back home, here is the Butsudan, housing  the remainder of Chu’s ashes, a Kobo Daishi scroll, other important keepsake items, and a Greenie Bone. 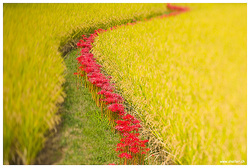 More Kindness: Tim finds an expert on the web, Dr. Veldkamp, who did his doctorate in Japan studying the place of pets in society and the emergence of pet funerals, ceremonies, etc. They exchange some emails, and Dr. Veldkamp sends Tim a number of studies about the topic. Tim is grateful to Dr. Veldkamp for his generosity. See here for a facscinating paper he wrote on Animal monuments and memorials in pre-war Japan and postwar developments: On the treatment of monuments for the human and animal war dead: http://todai-yale.jp/resources/docs/Mr.VeldkampEn.pdf

Higanbana:  Tim’s favorite wild flower that grows alongside canals in Japan, Higanbana. Known at Equinox Flower or Red Spider Lily, 彼岸花 is become known as the autumn exquinox flower, as it peaks during early Fall or late Summer in Japan. The canals and side roads in Mitsugi were full of them and their red color contrasts beautifully with the golden color flowing through the adjacent rice fields for which they act as a deterrent from rice eating rodents. I later found out the connection with the deceased as the annual O-bon ceremonies (お盆) occur during this time throughout all of Japan, paying homage to the spirits of ancestors or deceased and some consider this the flower of the dead..fitting for this time of travel.  Still unable to locate a artificial flower version to permanently put in a vase beside the Butsudan.


Update: Thanks to a kind internet friend, I was able to locate a seller in Japan. 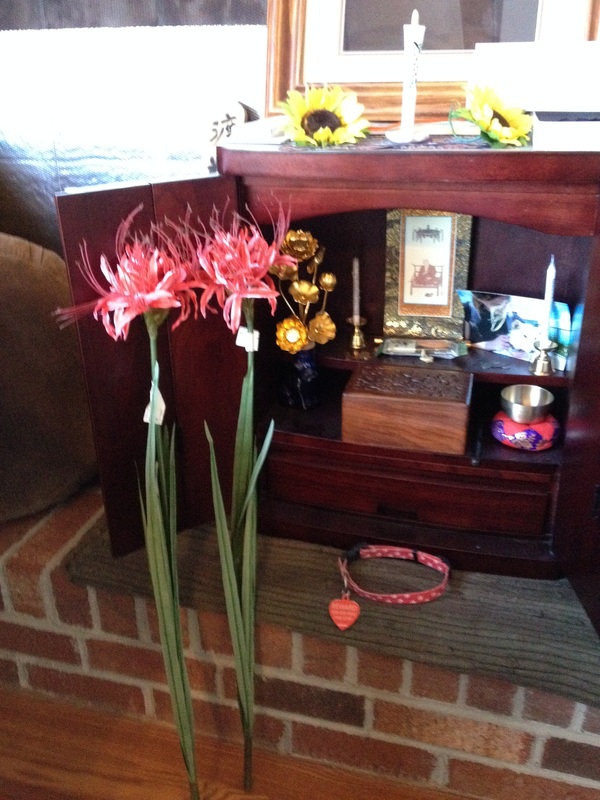 A word about Bato Kannon 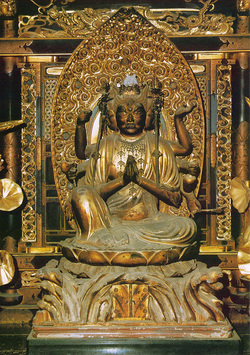 Bato Kannon Bosatsu is Hayagriva. A Hayagriva is a horse-headed deity….

“The BATO KANNON (馬頭観音, which means horse-headed Kannon Boddhisatva) monuments, which can be found, sometimes in relatively great concentrations, in the old neighborhoods of our city, are dedicated to the health and safety of domestic ANIMALS, especially horses. Until the proliferation of the automobile, the horse was, of course, extremely useful and important. Keep in mind, however, that during the Edo Period (1600-1868), most Japanese were NOT PERMITTED to actually ride horses, even if they owned them. They were used as beasts of burden, for farmwork and the transportation of goods . Eastern Japan (of which Tsukuba is a part) was a traditional horse breeding area and, during the Edo Period and beyond, Bato Kannon (馬頭観音) monuments became extremely common. They were placed at intersections,  roadsides, hitching posts (traditional parking lots) and watering troughs, and at places where the corpses of horses were buried.” http://blog.alientimes.org/2009/03/ive-discovered-one-in-tsukuba-at-last-a-horse-headed-kannon-sacred-stone-with-an-actual-horse-headed-image/ 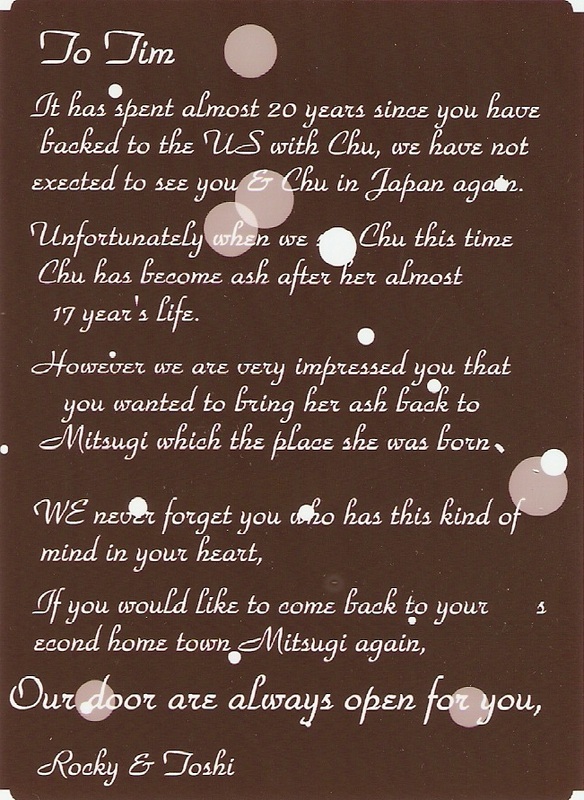 From Rocky and Toshi upon returning from our Japan Journey..April 2012

February 18, 2013 - ***It is good to have friends***
Today marks the one year anniversary of Chu's passing. Good friends Rocky and Toshi spent time at Chu's grave in Mitsugi, Hiroshima cleaning and organizing, "offering favorite food & flowers + candle & burn incense after built a new stupa". They sent us these pictures. How grateful to have such honest and caring friends in this world... 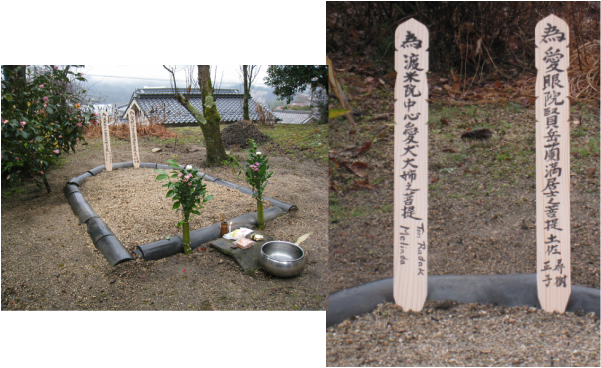